Uta, the world’s diva and “Shanks’s daughter”, has been the focus of much attention since her character was first revealed. Uta will be voiced by Kaori Nazuka and sung by Ado.

Uta will be voiced by Kaori Nazuka, who has played the main character Eureka in “Eureka Seven ”, Nanally Lamperouge in the Code Geass series, Toru Hagakure in “My Hero Academia”, and many other characters ranging from cute to cool to comical.

The singing cast of Uta will be led by Ado, a singer of the New Genesis who has been attracting attention for her overwhelming singing ability and expressive power since her major label debut in October 2020.

Trailer  & the theme song “New Genesis ” sung by Uta have been released!

Uta is the world’s most beloved diva who sings while hiding her true identity. The trailer for her first public appearance at a live concert has been released to heighten expectations!

In addition, the theme song “New Genesis” sung by Uta has also been released! The stage is set on the musical island of Elegia. As a large crowd of fans fills the venue, Luffy reveals the shocking fact that Uta is “Shanks’s daughter. In thetrailer, Luffy and Uta are shown as children meeting in Windmill Village 12 years ago, and we can’t take our eyes off the relationship between the two and their connection to Shanks! And finally, the Red Haire Pirates led by Shanks make their appearance…?

The film also depicts Gordon, a mysterious man who knows about Uta and Shanks’s past, and the Straw Hat Pirates in their festival costumes, fighting in battle. Along with this trailer, the theme song “New Genesis” is also released! The powerful voice of Ado, who sings for Uta, draws the viewer in from the beginning of the trailer. What exactly is this “new era where everyone is happy” that Uta envisions? And what direction will the story take? Please look forward to the heart-wrenching story spun with Uta’s singing voice!

The seven songs of Uta, which play a very important role in the movie, are composed by Yasutaka Nakata, Mrs. GREEN APPLE, Vaundy, FAKE TYPE., Hiroyuki Sawano, Yuta Orisaka, and Hata Motohiro, respectively, and sung by Ado, who is Uta’s singing cast member!
In addition, the theme song for the movie, “New Genesis,” which was shown in the trailer, will be sung by musician, DJ, and producer Yasutaka Nakata, who will be participating in “ONE PIECE” for the third time. Nakata is a leading figure in the global pop scene, and Ado is one of the hottest singers in the world today, singing a wide variety of songs.A distinguished lineup of artists will also provide the music for inesrt songs!
The song “I’m invincible” was composed by Mrs. GREEN APPLE, whose music has been streamed over 2 billion times and is overwhelmingly popular among people of all ages;
“Backlight” was composed by Vaundy, a multi-artist who not only writes lyrics and arranges music but also designs and creates videos himself.
“Fleeting Lullaby”was created by FAKE TYPE., a music unit based on dance music, characterized by its ever-changing tracks and pop and tricky rap.
Tot Musica” is composed by Hiroyuki Sawano, a composer who mainly works on music for TV dramas, animations, and movies. The song “The World’s Continuation” is composed by Yuta Orisaka, a singer-songwriter who started performing live as a guitarist in 2013 and is expanding his range of activities. “Where the Wind Blows” is sung by Hata Motohiro, a singer-songwriter who has sung theme songs for numerous movies and TV programs and is popular among people of all ages. The collaboration was made possible by the fact that music is the key to the story of this film. Please stay tuned for more information about the song!
Comments from the artists have also arrived!

Uta’s music videos are now being produced by different animators and illustrators. More MVs of Uta’s songs will be released in the future.

The teaser video for the first MV to be released is the theme song “New Genesis” by Uta (Ado) and Yasutaka Nakata! This song is one of Uta’s biggest hits and representative songs, and is also used as the opening song in Uta’s live performance scene in the movie.

The popular animator, who has created music videos for various artists and animations, including the music video for YOASOBI’s “Mou Sukoshi Dake” and Mitei no Hanashi’s ” Yoru wo Koeru Ashioto”, is in charge of Uta’s music video. In the teaser music video released this time, Uta, the world’s diva, is depicted in a colorful and sparkling world, creating a pop and fantastical image reminiscent of the “New Genesis”. Themusic video  depicts Uta as an artist in a different light from that of the main film. Uta’s short story “Uta Diary” will also be produced for each song sung by Uta. The short video will show Uta’s daily life and her thoughts and feelings about each song, and will also include scenes from her first live performance.The short videos will be released along with each music video until the movie is released!In addition, the schedule for the release of future MVs & Uta Diary has also been released! Please look forward to the world of Uta as depicted by various artists!

Main visual have been released!

We are pleased to announce the release of the main visual for “ONE PIECE FILM RED”, newly drawn by Eiichiro Oda, the author of the original story and general producer of the movie!

At the center of the visual is Uta, the diva and “Shanks’s daughter. She is depicted holding her hand to her chest and singing with tears in her eyes. Behind her is Luffy, gritting his teeth and looking determined, and the red-haired Shanks, staring ahead with a piercing glare. 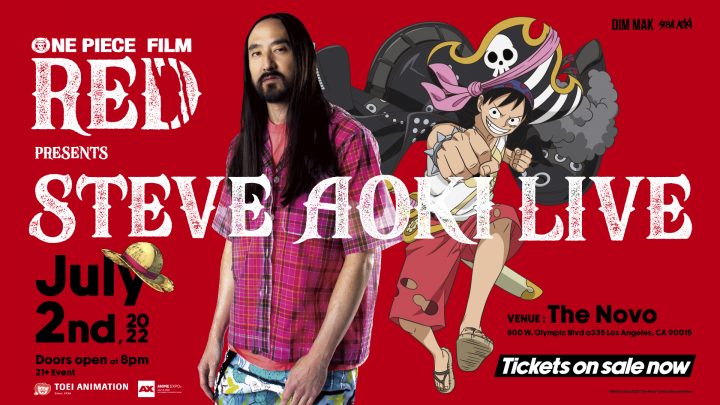