The song “I’m invincible,” composed by Mrs. GREEN APPLE and sung by Uta (Ado), has been released. This song has been available on various music distribution services since today, June 22 (Wed.) at 0:00 a.m.! In addition, the second part of the Uta music video project, a teaser music video, has also been released.
Mrs. GREEN APPLE is a rock band whose music has been streamed more than 2 billion times and enjoys overwhelming popularity among people of all ages. In creating this song, they said,, “We wanted to express the delicate nuance of Uta who has both strength and weakness, and who takes the stage to motivate herself to be strong.” They also commented on Ado’s singing: “We feel that the addition of Ado’s voice has further changed the chemistry and expanded the music as Utah songs! The unprecedented collaboration between Uta and Mrs. GREEN APPLE, sung by Ado, will add a powerful and gorgeous color to this film!
The music video was illustrated by animation artist Ai Niina, whose unique sense of color and touch has attracted attention as the artist responsible for the music videos for YOASOBI “Into The Night” (which has over 170 million views on YouTube), Olivia Rodrigo’s “drivers license,” and Tatsuro Yamashita’s “Sayonara Natsu no Hi” (Good-bye Summer Days). Ai Niina, an artist who has attracted attention for her unique sense of color and touch, created the song “I’m invincible” for the film. The music video for this song also depicts Uta and her unique worldview in a colorful and powerful way. Uta (Ado) and Mrs. GREEN APPLE have created a special teaser music video of Uta’s song “I’m invincible,” which Ai Niina has spun out in rich colors.
The full MV of “I’m invincible” will be premiered on YouTube [Ado channel]! In addition, a short episode of “UTA Diary #2” will also be available on the official ONE PIECE Youtube!

We have been energized by “ONE PIECE” since childhood, and we created this song ” I’m invincible ” to respond to that. Despite the title, “I’m invincible,” We wanted to express the delicate nuance of Uta who has both strength and weakness, and who takes the stage to motivate herself to be strong.. We were conscious of the excitement of seeing the great ocean that is typical of “ONE PIECE” in addition to our own sound that pushes forward,, and the addition of Ado’s voice created a further chemical change that expanded the music as Uta’s song! As big fans of ONE PIECE, we are also excitedly waiting for the release of “ONE PIECE FILM RED”.Let’s enjoy it together! 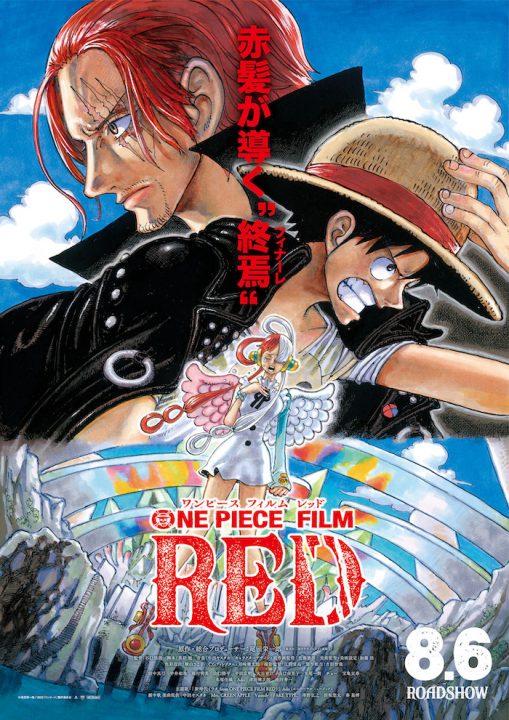 The official website of “ONE PIECE FILM RED” is open!